The NIDCAP Federation International (NFI) holds as a primary goal the support of parents as the optimal caregivers of their infant. Parent presence and active collaboration with their hospitalized infant and the health care team, enhances the infant’s neurodevelopment.1

The NFI acknowledges it is critical to continually reflect on the balance of safety and health concerns with known best practices to support optimal outcomes as communities, healthcare systems, hospital professionals, and families with hospitalized infants navigate COVID-19. The substantial benefits of parental participation in the care of their hospitalized infants, including skin-to-skin holding and breastfeeding,2-6 are increasingly considered to outweigh the potential risks of the transmission of COVID-19.

It is the NFI’s position based on the research available, that non-separation of parent-infant dyads and parents’ active participation in infant care are essential to mitigate sequelae for hospitalized infants during these critical periods of development.7-9

Please click here for the full statement with references 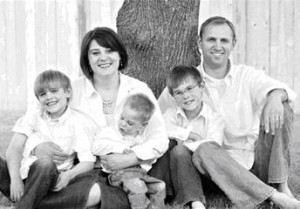 As interviewed by Deborah Buehler, PhD

I had never experienced anything like that before. It was pretty scary while at the same time the nursery staff made you feel pretty comfortable. I was there every day. I didn’t take a day off. Truman was in the NICU for 115 days. It was very scary at first. The first couple of months it was touch and go. He got pretty sick. He had a perforated bowel which caused the fluid to leak out into his stomach and he had to have an illeostomy which is partial removal of the small intestine. So he had an illeostomy bag for six months. But every day, we’d come in and I’d take our middle child, Carson, in with me and we would just go and hang out and read to him. I’d try to do as much as I could, as much as I was allowed to do with Truman. I was there all the time.

[During that time,] it was pretty difficult to decide where I needed to be because no one wants to leave their infant in the hospital and go about their daily life. It was hard to find the balance of what the two older boys needed from me and what Truman needed from me.

Please share the experience that you had with your nursery’s developmental specialist.

Julie [the developmental specialist, NIDCAP Professional] came in to observe Truman. She was training to write these little stories, like an hour long worth of observation, about the surroundings, the environment and how it was in the room for the babies. Just a complete observation and wrote it down in a story. She asked if she could do that with Truman and I was completely open with it. I asked for copies. She wrote a story about once every three weeks. I have every observation that she has written in his scrap book.

[Reading these observations] felt like I was right in the room. I was like a person standing in there observing everything and it was down to whether the curtain was open or closed. How Truman appeared to be reacting to things. [How he responded when] the machines were beeping. How comfortable he looked. What position he was in. What he might have been wearing or not wearing when she came in. Whether there were other babies in the room [or] whether we were there. It was pretty neat. It felt like it was coming out of my eyes. What she observed he was getting agitated with and what might help him to feel more comfortable. [Soothing him could be] as simple as placing your hands on him or just sitting quietly next to him and talking to him or reading. But mainly [he seemed comforted by] just touching him to have him feel our comfort. [The observations] were beautiful.

People who go through something like that with their children block a lot of it out because it is pretty difficult. But just being able to read through that later on and remember what it was like is comforting. I’ve had times where I’ve gone back and read through the stories. I have forgotten things that she has written. It brings it all back to my memory. It’s kind of an experience you don’t want to forget but at the same time you don’t want to remember having to see your children go through something like that.

I think that it would be a phenomenal thing for any parent who had to go through something like this to help remember the experience. We were very lucky to have Julie do that for us. She will be a person that we will never forget through this whole experience. We actually learned a lot about her personally and that helps to. It makes you feel like you are not just a patient, you have a purpose.