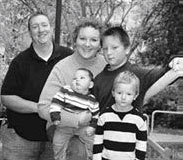 Bryden was the Christmas present Taryn and Brent had wanted. However, shortly after he was born on December 18th, Bryden began having difficulty breathing and was transferred to Children’s Hospital in Oklahoma City for life saving medical care.

As Taryn reports, “My husband and I were very upset, after all this is not how it was supposed to be. We had no idea that the next weeks would be the worst of our lives.” CPR was required to sustain Bryden en route to the Newborn Intensive Care Unit. Upon arrival at Children’s Hospital, his condition worsened. “The first time we saw him he was in the surgery room and the nurse was bagging him in order to keep him alive. I left the room so that he could have the surgery to place him on the heart-lung bypass machine, and I just sank. I only thought that was as low as a person could feel.”

During surgery, Bryden’s heart stopped beating, and as he was resuscitated, he received a laceration to his liver and experienced massive bleeding. “When we got to see him after the surgery, the nurse told us to prepare ourselves. Well, I am not sure that you can prepare yourself.” After receiving many blood transfusions Bryden’s body was swollen and the incision in his chest and abdomen was open. Taryn and Brent stayed at his bedside all night.

Ultrasound pictures of Bryden’s brain were taken the next morning which showed multiple strokes and bleeding in his brain. Bryden was removed from the heart-lung bypass machine and his breathing efforts were supported by a ventilator. “…they explained to us that this was not likely to keep him alive. Everyone got ready for the end.” For a third time, the priest was called to Bryden’s bedside. “I remember my husband’s breaking point was when the priest was called into the room. He yelled out ‘GET OUT NOW’ and then, after further reflection, he said to the priest, ‘I am sorry but you cannot be here.’” Twenty to thirty medical staff and family were in the room when he was taken off the heart-lung machine; the room was silent. “My own personal fight for Bryden’s life drove me. I guess inside I thought that if I fought as hard as I could it would somehow help him survive.” Bryden did not die. He continued to slowly recover with assistance from his parents and the entire medical team. Bryden’s parents went home for the first time in four days to be with their two older children. They explained Bryden’s condition to his ten year old brother. “This was the hardest conversation that I have ever had to have. He cried on and off for weeks. It was nearly impossible for him to understand why he could lose his brother.” During the next six weeks, Bryden began to breathe on his own and no longer needed the ventilator. “He had at least seven surgeries, and multiple blood transfusions. Bryden experienced many challenges including feeding, regaining muscle strength, keeping his joints pliable, and stopping muscle contractures. Sometimes I felt like we lost…and found our baby all in six weeks.” The Andersons were supported by Wanda Felty, the Family Advocate with the Oklahoma Infant Transition Program (OITP) at Oklahoma’s Children’s Hospital. Wanda’s interaction with families under stress gives them a sense that someone understands what they are experiencing and that they are not alone. Her support continues after infants are discharged as parents need her. As Taryn reflects, “Wanda is my right hand woman, my go to person. If I have any questions, she is the first person I call; she helps me in all aspects from how to weave through the system to simple pep-talks when I am having a down day.” As Bryden got ready to go home, Bunny Hutson, RN, Infant Development Specialist with OITP and the Sooner NIDCAP Training Center, received a referral for a behavioral observation to help Bryden’s parents understand his unique ways of expressing himself. As Taryn reflects with Bunny, “I remember being so scared when you did your evaluation and you talked about bathing Bryden. After I talked to you, I knew that I was capable of taking care of him at home. You totally put me at peace with my decision to take Bryden home and know that I was not doing him a disservice.”

The NIDCAP certified Infant Development Specialist in the NICU provides essential support for families who strive to understand their infant. The behavioral observation, which interprets the infant’s behavior and responses to the lived NICU  experience, environment, and caregiving interaction, opens the door to a deeper understanding and promotes the emerging relationship between the infant and family. Parents become more

confident in their parenting role when their own observations and understanding of their baby are confirmed and supported. Suggestions for caregiving, made in collaboration with the parents, provide additional support to the parents’ self-assurance as well as strengthen the infant’s care during the infant’s hospitalization and as they prepare to take their infant home. With the help and support of the Oklahoma Infant Transition Program (OITP) and the Sooner NIDCAP Training Center at Children’s Hospital, family centered care continues after discharge. The OITP staff meets the family in the hospital and continues to provide services to them when their child is transitioned home. OITP is one of the few programs in the nation that has a paid family advocate position. This position is held by a parent who has lived the NICU experience and has navigated the service system and community supports. The interaction that the OITP family advocate has with families offers them hope for the future.

Bryden went home with his parents on January 22nd; his parents often return to the NICU to visit those who cared for him. As Taryn reports, “Everyone else in the world looks at him as if he is his Magnetic Resonance Image (i.e., brain image). Our NICU family sees what he has come from and says, ‘You know what? We all know what he is supposed to be and do but look what he has already done. Only God knows what he will accomplish.” Bryden’s family works together and with the community to help him achieve his goals. “As long as Bryden is fighting, we as a family are fighting for him. We have a very different normal to our life now,” said Taryn. “We have different passions for rehabilitation and unconditional love.”