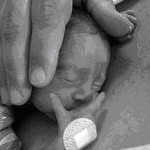 In another two days, our daughter Yaeli will celebrate one year of life outside the womb. In honor of her birthday, and out of our deep gratitude and recognition of the Newborn Inten­sive Care Unit team at the Meir Medical Center, my husband, Rafael built a website so that parents of preemies could have a place to go. It was just as important to my husband that the fabulous NICU staff that took care of our daughter, also have an easy way to check on the progress of infants who had graduated from the nursery.

Despite the fact that a year has passed, it is still difficult for me to write about our days in the NICU. Maybe one day I will find the strength to cope with these times and write about the experience. In the meantime, I have mustered up the energy to share some chapters of the book about Yaeli’s birth.

Over a year ago, when I was 25 weeks pregnant, Rafael, Noa’le and I travelled to Israel for a Passover visit. It was a great and fun time! Two weeks after we had landed, on a Friday morning, I was planning a shopping trip to a supermarket while Rafael stayed with our daughter in a place called Udim. I took advantage of the free time to go for coffee with two of my dear friends, Noam and Nurit. While we were at the coffee shop, I suddenly jumped with pain. Nurit, who would later be my mar­velous birth coach, said to me “it looks like a contraction.” Of course, I had no idea what she was talking about, and we parted with our goodbyes and my friends left for a weekend in Jerusa­lem. I continued on to the supermarket, which was, of course, one of the last activities I would do for a while. After spending over two hours at the supermarket, I returned home with my 5 kilos of chicken, which I remember was on sale, and did not feel well. It was obvious that something was going on in my body. I lay on the couch with a bottle of mineral water, but it did not help.

After a few hours and before supper, I decided that I should go get checked out to ensure everything was okay. I just wanted to be on the safe side and I called Udit, one of my beloved friends, to give me a ride to the hospital. When I got in the car, I an­nounced to her that we were just going to “pop in” to the Laniado Hospital for a moment. Fortunately for me, she refused to take me there, and insisted on driving me to the Meir Medical Center instead. What luck for all of us that Udit took me to Meir.

After spending some time at the hospital eating sweets, counting fetal movements, and being monitored, I was sure that I would be discharged. But the doctor insisted on following protocol and did an ultrasound. In the meantime, a more com­plicated case arrived. We waited patiently in the waiting room. Several hours later, we were called into a darkened room and the doctor announced, to my surprise, that my cervix was totally ef­faced. After tears and making silly comments like “I have a plane to catch”…and “I’m not a good enough human being to be a mother to a preemie, etc.,” it became obvious I was going no­where but the delivery room to receive my first dose of celestone (an injection that helps a infant’s lungs to mature), and of course, to be monitored. This is how our 79 day NICU stay began.

We had many long exhausting days, and days of feeling helpless. It is a silly cliché but the truth is, you would have to be there, in that situation, to understand. I am not sure that I can adequately describe the experience.

I was admitted to the high risk ward. The following day, Sabbath, I received my second and what would be my last dose of celestone. Now the task at hand was to try and hold off deliv­ery as long as possible. But my pains continued, and although no contractions were identified on the monitor, it was obvious that something was going on. It seemed to be just a matter of time until I would give birth and as one of the residents put it “every minute counts.” So I decided I would keep my legs tightly together and try and prolong the inevitable. In the meantime, important staff from the NICU came by to give me a general idea about what was happening and what to expect. It was obvi­ous that I understood nothing.

I had my own thoughts about it all. Yaeli had ideas of her own (even then she had a stronger will than mine) and against all odds on May 3, 2010 at 6:00 pm, she was born at 27 weeks ges­tation weighing 890 grams with Apgars of 9 and 10. Also present during my short labor in the delivery room was my professional and favorite labor coach, and older sister, Rachaeli. It was such a speedy delivery that the doctor asked me to wait until an incuba­tor could arrive. It was stressful delivering a preemie baby…not only was the pregnancy finished abruptly, but my baby was snatched away immediately, which did not help. Luckily, I had asked the doctors earlier what would happen and they explained to me that my baby would be taken away at once to be cared for when she was delivered. Still, when she entered the world so quickly and was taken away crying and wrapped in a warming blanket, I was left with a feeling of shock. From that moment on, I counted the minutes until I could walk (not “walk” but run) to the NICU and see Yaeli.

Many beloved visitors came to the recovery room to see me, including Rafael. He had not gone through the labor and deliv­ery with me and was able to go see Yaeli and name her and then came back to report to me about how perfect she was. During this time my sister-in-law, Dalit took care of Noa’le and we will forever be in debt to her for being there to help during this time and on several more occasions.

Two hours later, I ran to the NICU myself (and I could, since this short pregnancy made my body unaware it had been pregnant or that I had just delivered a baby). I entered the NICU which would become my home for the next two and-a-half months…and there I saw Yaeli, lying naked in the incuba­tor. Seeing her like this will always remain one of the most diffi­cult memories of my life. She was such a tiny baby and it seemed that any similarity to a newborn term baby was purely coinci­dental. I remember telling people that asked about her, that she was a close relative of E.T.’s! I remember thinking, she is mine but I did not get to hold her after she was born. However, by the next day, I was able to hold Yaeli skin to skin (the fabulous “kangaroo care”). Eventually, I started to count the hours that I held her, which just proves how many hours I did not. There are not enough days for us to live together to lessen the feeling of abandonment I felt at that time. The horrible fact was that every day I left her I felt that I abandoned her again. I knew logically and rationally that Rafael and I were doing the best we could but that feeling of abandonment remained extremely strong…that’s just how it was.

Yaeli was like a panther, and did not seem to be bothered by anything at all. She was strong and insisted on breathing on her own. Yaeli seemed to think that the NICU was some type of health resort! She slept and gained weight. Our good for­tune, which began when we arrived at the Meir Medical Center, continued on. You see, there are significant differences between various NICU’s. Despite Yaeli’s severe prematurity at less than 30 weeks and weighing less than a kilo of sugar, our NICU days were viewed as “easy” ones. There were no severe complications or frightening incidents. The staff in the NICU would often pass by Yaeli’s incubator and say to us “she’s a cutie pie” and move on. My husband Rafael thought this statement was Hebrew medical terminology. Most of the time there was nothing major for the staff to report about her. As I already said…we were lucky. But despite our “easy” NICU stay, I think back and realize that these were some of the hardest days of our lives. We are so thankful to everyone who helped us get through this experience more or less in one piece.

Even though Yaeli is no longer in the NICU, the NICU is not out of us…other parents of NICU graduates claim that some part of the experience always stays with you. Nonetheless, we don’t spend each and every moment dwelling on Yaeli’s prematu­rity. Yaeli has grown to be an adorable and “normal” infant. Even though it is her first birthday (although in real terms she is 9 months corrected age according to calculations), she is per­fectly healthy. Knock on wood!